Finally attempted to actually start drawing digitally on Photoshop (ditched Corel). I have to say I expected much more from myself when I sketched the below image. The shading & lighting are all a mess and PS is a bloody pain to learn, but so far so good ... 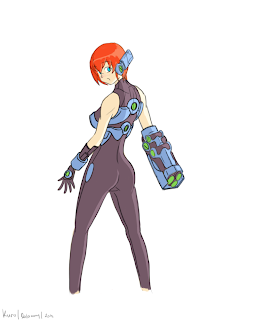 The character above is from a H-game called "Kurovadis" by Kyrieru and no, it is most definitely not for children. A frontal sketch of said heroine was posted on his blog, which led me to hastily take the opportunity to get my lazy ass to learning PS and drew some arse.

I should probably seek guidance from seasoned PS users as I continue to learn the basics on my own.

As for the purpose of this blog, it is a blog in which I would utilize to cover my development of H-game(s). For you to stumble across this blog, you should probably already know of a multitude of such games. Now, as much as I would like to show you demos of the game in development, I cannot, simply because it isn't very far in development and that I don't think it is good enough (it never is!). And if it's gonna have H-CGs, I'm gonna have a whole lot more to learn and practice.

If you want to know, it's gonna be 2d-platformer.
Posted by datanony at 11:20