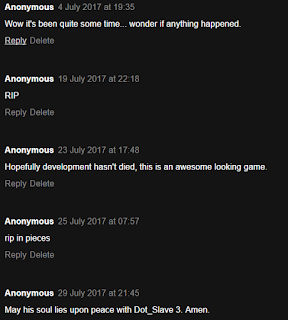 Sorry for the sudden disappearance.

I had to go away for a bit as my full attention was needed elsewhere.

Been putting away many things in my life and I had to sort those out.

Now I have time again...

Bulk of this update went into the BGMs. We finally have a separate theme for the bosses as well as a victory and game over jingle. While waiting between rounds, a slightly ominous/dark ambience will play in the background (supposedly accompanied by whistling wind sounds but I haven't gotten that done yet).

Let me know what you think of the new sounds! 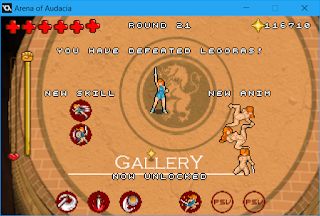 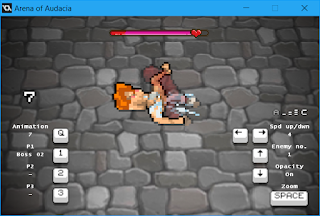 I understand that you may have some questions on the changes applied to this release in preparation for v1.00. Let me hear your thoughts in the comments below.

Gonna take a short breather to post an update or my back will break.

I needed to fix up a few of the bugs the plagued the Gallery. In addition to that, I had to clean up and set the locking/unlocking of skills and animations so that it worked properly now, since I had left them in a messy state during development (where they worked, but only barely).

Sorry for the delay, but it's going to take a bit more time. It's coming together nicely and I want to finish at least one more Boss-dominant animation. This is all for going ahead to a "proper" demo.

Also, the BGMs have been re-arranged with better quality samples, so expect to hear them soon, including a new BGM for the Gallery mode.

I hope I didn't develop some chronic back injury having sit in front of the PC for god-knows how many hours.

So 2017 is here. I'd like to take this opportunity to wish everyone a very Happy New Year! If you've been following my developments ever since, I want to say I'm really grateful for your participation and patience (seriously!).

I've given it some thought. Moving into 2017, here's the plan for Arena of Audacia (chronological) below. Discussions with my team were had -regarding these decisions:-


My resolution for 2017 is to make it to point #7 in the list without losing too many limbs. I really want to finish this.

Dates have not been determined. I hope to announce them as soon as possible as we draw closer to v1.00. I understand that you may have questions regarding the decisions above. Let me know your questions and concerns in the comment section below. Your thoughts are important to me!


The next version will be v0.95, set to be released this month.

Let's have another good year together 😅

This release features a new voice from our VA as well as (2) sketches of BGM from our composer. The BGMs are still incomplete, and we are still testing the best mood/atmosphere to incorporate into the BGMs. Right now inspirations are from the "Golden Axe" games, but if you (our players) have references or possibly something that you think would be better for the AoA universe, I'd like to hear them out (in fact AoA needs it!).

I've also included (3) new boss-specific player-dominant animations, one for each of the first 3 bosses. To trigger them, you only need to run up to them (like how enemies do to the player when knocked down) during their near-death state, with the "Finish" notation. This is intended as a reward for having defeated bosses.
The new sex skill passive isn't intended to change the gameplay in any drastic ways. The effects are mild, and is triggered on maxing out your lust bar. Right now they'll last forever, at least until you gameover or changed the sex skill.


Your feedback can help me improve AoA, so I'd greatly appreciate if you can tell me how you feel about:


!! Oh right before I forget, press 'M' to change BGMs. Pressing 'N' will fade-in and out of music.

If you got a feedback, let me hear it in the comments below!
Posted by datanony at 02:16 52 comments: