I will (MUST) release v0.87 near the end of this month. There's not much new, I'm sorry

---
So I was thinking of renaming the project files. As it stands, it is appearing as AoD_Alpha2 when it should be AoA (for Arena of Audacia) instead. That's just confusing for no good reason. At the same time, I was thinking about dropping the "Alpha" too, but deduced that it is not yet time.

In the next release, you will see AoA_Alpha3 instead of AoD_Alpha2 when you extract the files.

NOW with that out of the way, we get down to what's been cooking.

From the first picture, you can see that I've added the last TWO active skills into AoA and at the same time, it is missing the third "Settings" tab. That's because I've moved it into the Exit Menu (accessed via ESC key) because it just doesn't make sense to have it in the Skills Menu. I waaaay too much time moving it because I couldn't remember how it worked (even when I coded it) after not revisiting the code for too long. 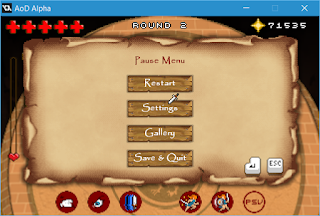 The gallery is also in the works. It's working for now, but that's probably because I haven't tested it thoroughly enough. The background is still missing (just reusing the arena BG) though. Will have to sink some time into making a nice one.


Following feedbacks on previous releases, the skills were too expensive to upgrade or buy even. I've run down the skill costs, and I think it's in a pretty good range now (standardized 1,000G increments). On top of that you'll have small sum of money as reward for performing double/multi-kills too.

Players can toggle between Default/Insatiable/Noble by upgrading the passive skill. At least with this, player can choose how the heroine takes being sexed up. Afterall, not all heroines have to hate/love sex!


Tell me what you think about the passive skill I suggested. It won't make it for v0.87, possibly the release after. If you have delectable ideas, lemme know in the comments.