RE-UPLOAD: Exporting in GM:Studio is a little different as compared to GM8.1. I'm still figuring out why the few of you couldn't get the game to load all resources. Hopefully after meddling the export options a little, the 'never loading resources' issue gets fixed with this re-upload of v0.2.
If anyone wants to know, this export is for Windows only.


If in any case this re-upload failed to execute, try to extract/move v0.2 anywhere onto C:/ drive and run as 'Administrator'. If that still doesn't work ... well I'll have to consult them developers.

EDIT #3: Apparently the heroine to can get stuck only on right-facing walls (or wall boundary on left of map), which occurs when you jump into the wall with the back of the heroine, then looking left into the wall.
---re-upload end---

I was testing some projectile trajectory calculation, so the new enemy only has a kinda arcing ranged attack. I was suppose to put a link up yesterday but then I realized I completely forgotten about the death animation for the new enemy. Now that I have got that done, I was finally able to put it up. 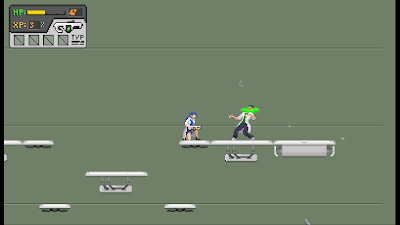 Download (3MB from MF):  --please use link at top of post--
Link can also be found in download(s) page.

I haven't done extensive testing on this new update so if there are bugs or anything amiss, let me know in the comment section. There's this white flashing that is suppose to occur when enemies or the heroine gets hit; to indicate invulnerability but it only appears after going into full-screen. Will fix that in the next update.

Because I am terrible at estimating workload, I couldn't make it before Christmas, but I have to at least get something out before the year ends. As for the next update, it wouldn't be until a good long while. I (hopefully) intend to have a main menu up, a couple more tilesets with matching backgrounds, maybe a mini-boss to test pathing in GameMaker, which would possibly be a move from Alpha onto Beta.

The heroine keeps the ponytail. I keep thinking I'm forgetting something though ...

EDIT #1: I forgot to wish the new year. So have yourselves a Happy New Year!

EDIT #2: The DEF attribute is just part of the template for the time being. It doesn't do anything yet.
Posted by datanony at 01:18