"Eroico" and the May Update


I tried to stop myself at the heading. Believe me.

Okay I've been slacking. Well not really. After drawing tilesets in the past weeks, I thought I've drawn enough to start putting together a whole zone/area(there will be multiple colour-denoted zones to traverse) in the game. I did draw alot, but they all lack texture.

So basically I've been putting together some very uninteresting looking area. Didn't like it so I went back to the tilesets and fiddled  some more. Refer below picture: 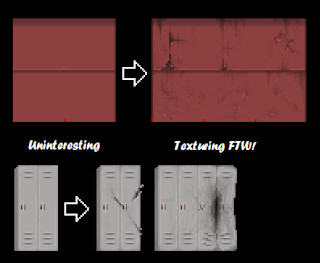 I had no clue how to texture, initially.

Of course I SHOULD know (texturing) this before I start making a game right? I knew, but I didn't know it would be taking so much time (I may be inefficient). Being frustrated at my slow texturing progress, I decided to play ..

Eroico - a mini-H-platformer game by Kyrieru 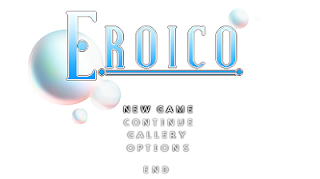 Before I start, I just want to point out something first: 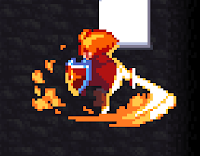 Learn this 'move' and learn it well for it is your friend.
And don't forget to use the shield.

Eroico, a 2D-ero-platformer was released by Kyrieru a few days ago, so I'm actually late to playing the game. I'm sure many have already played the game to oblivion but in case you haven't played it yet, go to his blogspot and try the demo (then buy the game via PayPal, or wait a little more for it to be released on DLsite).

So I've played Eroico and I think Kyrieru managed to capture the atmosphere of an 'Adventure that promises the player many a great ride'. The animations were fluid & had transitions, and the background music fits very nicely with the drawn background, giving some feeling of 'immersion'.

Combat controls are responsive, but Eroico's combat was designed such that there's a start-up delay to all the protagonist's attacking moves so players will often find their attacks coming out slower than the quick-footed catgirl.

Upgrades are always fun. You use the sparkly bits that come off the enemy girls to obtain sword and ranged-magic upgrades. The upgrade pedestals are placed around the levels (if you miss them, you can still beat the game, but why would you not want a burning sword?):- 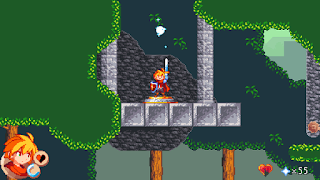 Step on the pedestal and be bestowed the burning sword of Ero.
I prefer to use 'burning' because. 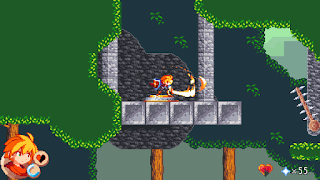 The upgrade gives extended attack range but not attack power.

I have to say that the platforming part of the game is actually really challenging and fun. You'd think you would be doing a lot of jumping around, but what you're really doing in Eroico is a lot of jumping around, dodging, attacking and messing up, all at the same time.
There is a sense of achievement for  Playing on normal, you'll have very few chances to make mistakes as a few can mean starting the level over if you haven't gotten to the checkpoints. There are only 2 checkpoints in each level and the first checkpoint can only be found at about halfway through the level.

Back to progress report


I don't always write reviews. The reason I brought Eroico up is because I wanted to point out that a nicely put together background and tileset can really go the mile in bringing out the 'life' in a game. From the screenshots above, one can immediately feel the 'colour' of the game.

What I'm really saying is that that's what I'm trying to do in Labcoax. I haven't achieved a satisfactory level with the texturing yet but I think I'm getting close to it (that satisfactory level). I want to do at least this before I release anything because first impressions are important afterall!
...

And before I forget, I was actually doing the "intro story" to Labcoax before my attention got diverted to adding tileset textures. Here's the sketch:- 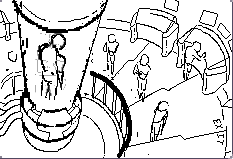 I'll just leave that here for now and the rest of the story to your imagination (let me hear/read it in the comments!). I apologize for not having a new release for Labcoax this time around. I couldn't get as much work done as I thought I could.

Q: If you've played Eroico, what were the few plus points you think it has?
Posted by datanony at 08:32