I know it's been forever since my last post and I apologize for that. Responsibilities and work load is currently at an all-time high so I'll be bogged down with RL for a little longer before I could resume work with Labcoax. Whilst busy, I did get a thing or two nearly done, such as one of the intro images (there's a total of 12 images I believe, making a sprite depicting a little event) for Labcoax below: 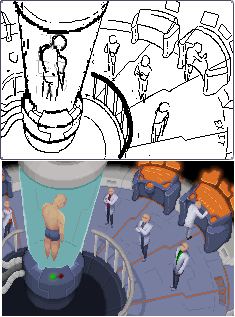 As you could see, it's still lacking shadow/shading and hair! You may think that I've got it all figured out, but figuring out what hair to give characters has always taking up lots of time for me. So there's still long ways to go.

On the bright side, user tacokurt @ Furaffinity.net recently (actually it's been a whole month) made a fanart featuring the heroine of Labcoax and a monster creation of his/her own! The art style is pretty distinctive so check it out at tacokurt@furaffinity. Site contains furries (doh).

I'll answer to questions in the comment section regularly so that it won't seem like I've fallen from the face of the planet.
Posted by datanony at 08:24