Also, I made it such that enemy sprites overlapping the player in the sexing mode will be transparent so you could see more of the heroine (like below): 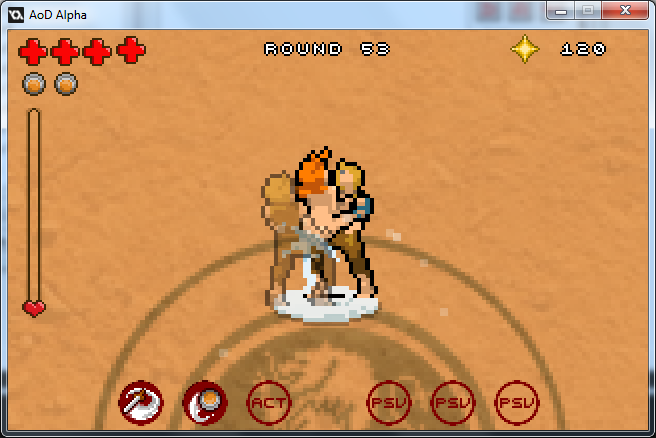 Apart from that, I've at least gotten lust/arousal bar working now. All that's left now is to set its effects (to grant health and maybe also slight change to the end of the sex interaction) when it fills up.

I want to have v0,2 up before Christmas so I better get to fixing up the damned bugs.

As a side note, Azurezero has completed his platformer game Grimoire.

You play as Rika, in the search for the Grimoire of spells. Along the linear game progression, you'll obtain a total of 4 spells in which you use to progress through the simple level puzzles.

The game is a short one and has a total of 5 CGs. If you're looking for a casual platforming eroge, you can check out the Grimoire demo.

---
In addition, I thought I'd also share these few eroge I saw as I scoured the forums a little bit:

Anthophobia by Sourjelly, is a 2D-side-scroller zombie eroge that plays much like Parasite in City, but with puzzles, backtracking and a heroine in pink sweater (which comes off, yay).

Sprite sex feels like they could use an extra frame or two though in the demo, but still good. Also zombies are primarily green and grow flowers.

Malise and the Machine by Eromancer, which at first glance probably won't come across as one an RPG-Maker to the eyes of many. Rewritten engine by Eromancer allowed MatM to look like above, although there have yet to be a gameplay video out yet (probably within the month).