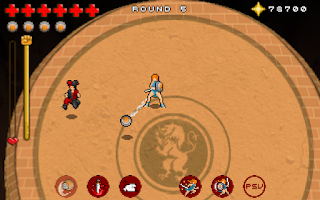 One of the big changes for this release is the charging mechanism. I spent a lot of time trying to get it working and giving the skills the appropriate charged properties. And since charging requires you to hold down a button, skills now only activate when you 'release', as opposed to 'pressing' like before (I feel like this may throw people off).

Another big change is the "end of round" handling. Previously one can access the Skill Menu and make changes any time, but now you can only do so after finishing the round. A harmless wooden sign will spawn, in which players will have to destroy to proceed. I figured that after a long hard ROUND of enemies, one would like a breather to test out skills and such.

Tell me what you think about the changes!

--
Meanwhile I've been playing with Anthophobia since the game was recently released (should be pending for DL Site). And since sprited sex is likely the reason you are here, Anthophobia has tons of them. Seems like they're planning additional content too!

If you got a feedback, let me hear it in the comments below!
Posted by datanony at 07:39